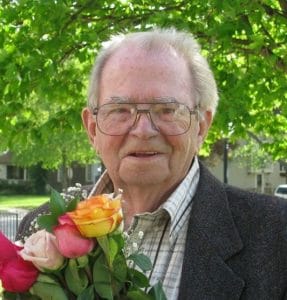 Warren Alexander Smith, 87, of Dunville, Ontario, passed away peacefully in his sleep on Sunday, July 16, 2017 at Haldimand War Memorial Hospital.

Warren was born in Boston, Massachussets on November 20th, 1929. He graduated from MIT with a degree in Engineering and served active duty during the Korean Conflict in the U.S. Army. After returning stateside, he contributed many designs, inventions and developed multiple advanced products in the area of Capacitors and Power Factor correction fields over a span of 40+ years in his profession.Warren worked and lived in many different places including Laredo, Texas where he met the love of his life, Norma. Later moving to Amherst N.S. where they married on April 10th, 1976 and resided for 12 years before moving on to places such as Ogallala NE, Mineral, Ill, Jeffersonville IN and Guadalajara Mexico. As a young man, Warren enjoyed playing guitar and singing country music. He went by the name “Yodeling Slim” and recorded a few songs alongside and for legendary musician Wilf Carter. This was truly a passion of his and he enjoyed singing and listening to those classic country/bluegrass songs.Warren also enjoyed reading, online games, movies, watching his favorite re-runs of Star Trek and had a great sense of humor. He was a great storyteller and knew how to keep one’s attention on him.

Funeral services will be held at 3:00 PM on Saturday July 22, 2017 at JW Hart Funeral Home in Dunnville, Ontario with the Reverend Peter Dempsey officiating. The family of Warren Smith wishes to thank the Haldimand War Memorial Hospital and First Baptist Church. Online condolences may be posted to www.jwhartfuneralhome.com