So often we are unprepared for a task as daunting as summing up the life and essence of someone we love and adore. There is no right or wrong way to pay tribute whether it be a formal death notification or throwing Miss Manners guide out the window and recounting an unabashed remembrance of an untamed spirit and the audacious and courageous adventures that shaped their (and your) life!!    (Posted with permission of the family) 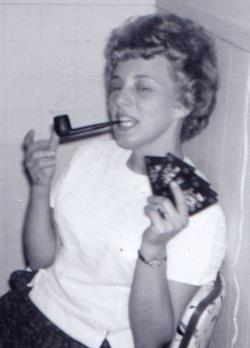 Margaret Marilyn DeAdder, professional clipper of coupons, baker of cookies, terror behind the wheel, champion of the underdog, ruthless card player, and self-described Queen Bitch, died on Tuesday, January 19, 2021. Marilyn, the oldest of four siblings, was born Marilyn Joyce in 1942, to parents Hannah and Edgar Joyce, in New Glasgow, NS. She grew up in a modest home, which still stands on the top of a hill where the Westville Rd. forks to the Town of Westville in one direction and the old drive-in in the other. Growing up with very little taught her how to turn a dime into a dollar, a skill at which she’d excel her whole life.

Marilyn loved all children who weren’t her own and loved her own children relative to how clean-shaven they were. She excelled at giving the finger, taking no sh!t and laughing at jokes, preferably in the shade of blue. She did not excel at suffering fools, hiding her disdain, and putting her car in reverse. A voracious reader, she loved true crime, romance novels and the odd political book. Trained as a hairdresser before she was married, she was always doing somebody’s hair in her kitchen, so much so her kitchen smelled of baking and perm solution. Marilyn had a busy life, but no matter what she was doing she always made time to run her kids’ lives as well. Her lifelong hobbies included painting, quilting, baking, gardening, hiking and arson. Marilyn loved tea and toast. The one thing she loved more than tea and toast was reheated tea and toast. She reheated tea by simply turning on the burner often forgetting about it. She burned many a teapot and caused smoke damage countless times, leaving her kids with the impression that fanning the smoke alarm was a step in brewing tea.

Marilyn liked to volunteer and give back to the community. She was a lifelong volunteer at the Capital Theatre in downtown Moncton, which her sons suspected was her way of seeing all the shows for free. For all of Marilyn’s success in life, her crowning achievement occurred in the mid-to-late eighties, when, left with mounting debt, no job, no car, and no driver’s license, she turned it all around to the point in the early nineties that she had paid down her house, paid cash for all her cars, and got her three boys through university.

Marilyn is survived by her three ungrateful sons Michael (Gail), Paul and David (Trudy), whose names she never got completely right, and whose jokes she didn’t completely understand. She loved them very much, even though at least one of them would ruin Christmas every year by coming home with facial hair, and never forgot that one disastrous Christmas in which all three sons showed up with beards. Everything she did, she did for her sons.

Marilyn is survived by her three granddaughters Meaghan (19), Bridget (16) and Madelyn (5).  While her sons committed unspeakable crimes against humanity, her granddaughters could do no wrong. While her sons grew up on root vegetables and powdered milk (funneled directly into the bag to hide the fact that it was powdered, fooling nobody), her granddaughters were fed mountains of sugary snacks as far as the eye could see, including her world-famous cookies and cinnamon rolls. Her love for them was unmatched.

Marilyn is survived by her sisters, Melda and Linda, and her brother, Lloyd, who still owes her $600* (*inside family joke – sorry, Lloyd).  Marilyn is also survived by an incredible number of close friends, who cannot be named for fear of missing somebody.

Marilyn, ever the penny-pincher, decided to leave this world on the day Moncton went into red-alert, her sons believe, to avoid paying for a funeral. But, on the other hand, she always said that she didn’t want a funeral, she wanted an Irish wake. She didn’t want everybody moping around, she wanted a party. Marilyn will get her celebration of life when COVID-19 is over. In lieu of flowers, the family asks that you do something nice for somebody else unexpectedly, and without explanation. We love you, mom, a bushel and a peck. A bushel and a peck and a hug around the neck.

Her arrangements have been entrusted to Cobb’s Funeral Home and Cremation Center, 330 Whitepine Road, Riverview (869-2007).  Online condolences may be expressed at www.cobbsfuneralhome.ca

I am so grateful that this was shared with me. I could not help but feel good and joyful.  Just a few days ago I never knew Margaret Marilyn DeAdder even existed but after reading this tributeI felt as though I had known Marilyn all my life, my one regret is that I did not. Well done indeed.

I am so sorry for the loss of your Mother and Grandmother. I read her obituary in its entirety and I also wished I had met your Mother. In this day and age honesty is lacking in all walks of life. When I meet a straight shooter, from the hip, no crap, I do know that they have a heart of gold. Raising 3 boys and keeping them in line must be a task in itself. We have 2 girls so I didn`t experience it myself. Grandchildren are special in a parents life`s , but the sugar and spice she provided them with were the fact that they were girls and she raised her sons to do the job of upbringing. So kudos to you boys that raised your girls proper so that your Mother didn`t have to carry on her tradition of parenting. P.S. Everytime you 3 boys grow a beard, your Mother will be in your thoughts daily. There was a method to her madness, other than old school didn`t think face hair was acceptable.
If your Mother`s party is anywhere near Dunnville, count me in. I`m in the mood to let my hair down.
R.I.P. Margaret, sounds like you deserve it.

I wish I met this lady. This is the story of a life well lived. Thank you for sharing