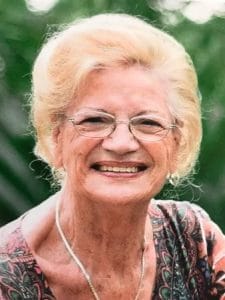 GRUTER, Wilhelmina “Willy”. Passed away in her Dunnville home on Saturday, October 16th, 2021.
Willy will be dearly missed by her husband Hank and their children, Yvonne (Dennis), Tony and Michelle (Micheal). She will be forever cherished by grandchildren Andrew (Savanaugh), Shirlene (David), Samantha, Matthew, Marcus, Tristan and by her great grandchildren Nevik, Nathon and Benjamin. She will be missed by her siblings Aad (Ineke), Jan, Carla (Niek), Leo, Gonny (Joop) and Jacqueline (Hennie).  Willy was predeceased by her parents Adrianus and Marreke Van der Bol, and her brother Frans Van der Bol. She also leaves many memorable moments to her extended family and many whose lives were touched by her selfless actions and acts of kindness during her later years as a PSW.
Willy was born in the Netherlands on January 1, 1936.  While on the beach, a very handsome blonde hair blue eyed young man caught her attention and she his, as well.  This was the beginning of a forever love story that spanned for more than seven decades. June 8, 1960, Willy and Hank were married and immediately made their way to Canada and settled in Dunnville where they started a hairdressing Salon.  Willy was well known for the then Updoes such as, the beehive and the French roll. She had a talent for creating beautiful hairstyles and had many regular customers that she developed lasting relationships with. During the late 80’s, they purchased the Avondale Gas Bar, on Concession Street where Willy became well known for treating all the children that came to the store with candies.  Today, those children now adults pleasantly greet her in the streets of Dunnville.  In the late 90’s they sold the store and retired.  Willy tried that out but found she just couldn’t settle into the retirement lifestyle. So, she studied to become a PSW to serve those that needed personal care. Willy loved her new job and continued a long career with the VON and St Elizabeth for twenty five years. Willy officially retire at age 79 to care for her husband, the love of her life.
Willy loved to travel and spend time with her family. They both travelled frequently with family to their homeland and south during the winter months.  When they weren’t traveling, she was frequently surrounded by family.
She is now at peace and in the  hands of God.  Visitation will be held at J.W. Hart Funeral Home, Dunnville Wednesday from 6:00 to 9:00 p.m. Funeral Mass will be celebrated at St Michael the Archangel Roman Catholic Church, Dunnville on Thursday October 21, 2021 at 1:00 p.m. followed by Interment at Woodlawn  Cemetery. In lieu of flowers, donations to the Alzheimer’s Society of Canada ( alzheimer.ca ) would be much appreciated by the family. A sincere thank you to our dedicated and loving care providers; Paula VanderHeiden, Tanya Langraap, Steeve Matheus and Habib Rizwan.
Online condolences jwhartfuneralhome.com

So sorry for your loss. She was a beautiful person inside & out. She will be missed by all who knew her🙏🙏

Larry and Liz Koster
9:20am

Our deepest condolences. Willy was such a busy lady. Always with a smile. Sorry for your loss.

What a pleasure to have know Willy, I worked with her at St. Elizabeth’s, the clients loved her. She was such a caring and compassionate person. Condolences to the family and friends. Until we meet again!

I am so sorry for your families loss .Willy was a very special lady .Willy was always so positive and loved a good laugh .Her love for her family was something she spoke of often .
Heaven just gain another angel 😇 Rest in peace