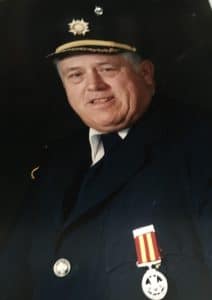 Gifford, Ronald Laverne “Tiny.” At St. Josephs Hospital, Hamilton on Tuesday April 18, 2017 after a brief illness in his 82nd year.

Ron worked for Dunnville Community Telephone and then retired from Bell Canada. Ron’s huge frame earned him the nickname “Tiny” and he was easy to pick out of the lineup whether it was baseball or hockey. Ron was a dedicated volunteer with Fire Station 2 and retired from active service as Deputy Chief. An avid outdoorsman Ron loved to hunt and fish and passed his love and knowledge of the outdoors to his sons and grandchildren.

Friends may call at JW Hart Funeral Home, Dunnville on Friday from 2-4 & 7-9 pm with Funeral Service in the Chapel Saturday April 22, 2017 at 11:00 am. Interment Dunn United Cemetery. Memorial donations to the Dunnville Hospital & Healthcare Foundation would be appreciated. Online condolences www.jwhartfuneralhome.com