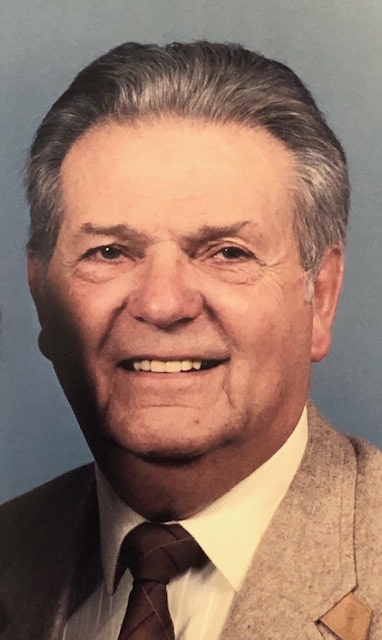 It is with great sadness the family of Charles “Chuck” Weikman announce his passing on January 22, 2021 at the age of 92.
Chuck (Dad) will be missed by his wife Shirley (nee McKeown) of 67 years. Daughters, Judith (David) Drosky, Susan (Ken) Wills, Terri (Walt) Bilinski, his son Paul and his wife Christine. Fondly remembered by his 9 grandchildren and 12 great grandchildren. Chuck was born in Weisenhorn, Germany in 1928.  His family immigrated to Canada in 1931, when Chuck was 3 and settled in Banff, Alberta before relocating to Dunnville. He joined the Ontario Provincial Police in 1953, serving for 35 years.  Chuck had a love of cars and enjoyed restoring his 1957 Corvette. Chuck and Shirley enjoyed travelling the world, boating, square dancing and wintering in Florida for 21 years.
Chuck was a devoted Catholic and a member of St Michaels Parish in Dunnville. In lieu of flowers, donations can be made to the Dunnville Hospital & Healthcare Foundation (dhhf.ca). Online condolences jwhartfuneralhome.com

Dear Wiekman Family,
From our family to yours we send along our deepest sympathies. Although our paths haven’t crossed in several years, good memories remain.
Grace and peace to you all,
Carson and Donna Culp

Gail and I want to express our deepest condolences to Shirley and the entire Weikman family. Chuck was a quiet, thoughtful and gentle man who will be sadly missed. You are in our thoughts and prayers.

Shirley , Judith, Susan.Terri,Paul and families Nancy and I send our deepest condolence to you and your families on the loss of your husband and dad Chuck. I worked with Chuck for 10 yrs 67-77 in Smithville and thoroughly enjoyed his friendship. He will be missed .
R.I.P Friend

To Shirley and family it is with sadness to hear of Chucks passing. I have good memories of getting to know Chuck when my dad bought the house on cleary ave. I send my condolences to all the family.

I was saddened to hear of Charle’s passing. As a young constable in Smithville, Detatchment I often relied on Chuck for good and helpful advice during my tenure 1966-1972. He was a real all around gentleman. My thoughts and prayers are with Shirley and family.