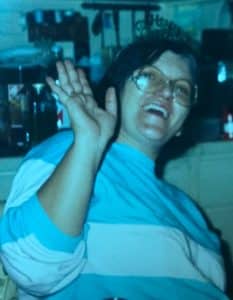 It is with heavy hearts that we announce the passing of Sandra Jean Stewart at the age of 72, after a long battle with COPD Sandra passed peacefully, with her family by her side on January 12, 2023.

Friends are welcome to join the family on Saturday January 21, 2023 at the Royal Canadian Legion Br 142, 305 Queen Street Dunnville from 1:00 to 4:00 pm. Online condolences jwhartfuneralhome.com

RIP to Sandra Jean. She was loved by family and friends.
God has chosen to take her to a warm loving place in heaven.
May He bless those left behind, to see her again in happier times.
From Pauline Smith
(Brenda’s sister-in-law)

So sad to hear this news. Your now with your Mom and Dad. I will always remember our days growing up. RIP cousin.
I cannot attend your memorial service. But I am there in thought. Love your cousin.

Sending hugs to Sandra’s family. She always was a happy go lucky girl. Big smile no matter what. Spread your beautiful wings. And rest in paradise 💘.

I am so sorry to hear this news… my condolences to George Sr, Jr, Melissa, Steven, Benjamin, Nathan, Jason and the rest of Sandra’s friends and family. My love and prayers are with you all during this difficult time. Xoxox