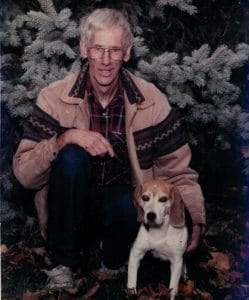 In Loving Memory of Daryl Adams. Beloved brother of Lawrence Adams and sister-in-law Tresia Boddington.  Much loved uncle of Corey Adams and Lynne Hussey.  Predeceased by his parents, Fred and Ina Adams, brother Earl Adams and sister-in-law Yvette and nieces Darlene Sorge and Nancy Hale.
Daryl was a master craftsman, who worked for years building homes with his brother Earl.  Daryl’s special projects included building motorized and horse-drawn buggies and a magnificent 40 foot sailboat.  Daryl always had a beloved dog by his side.  He was an avid motorcycle rider, who switched to the safer regular bicycle ride in his later years!  He also loved to sail and now has sailed away from us, on Thursday, June 16, 2022.  Cremation has taken place with a private burial at Riverside Cemetery, Dunnville at a later date. Memorial donations can be made to SPCA (410 Jarvis St., Fort Erie, ON  L2A 2T1 ) or to a charity of your choice. Online condolences jwhartfuneralhome.com

BEEN UP YOUR WAY SEVERAL TIMES BUT DID NOT KNOW WHERE YOU LIVED. SAD!! TO THE FAMILY I AM SO SORRY TO HEAR OF HIS LOSS. HE WAS A GREAT FRIEND YEARS BACK TO ME AND MANY MORE. WE ALL GOT OLDER AND MOVED ON IN LIFE. U WILL ALWAYS BE REMEMBERED BY MANY AND YOUR FUR BABYS . GOD SPEED

I am so very sorry to hear of your loved ones passing. May you find comfort in the great memories you have in your hearts. RIP

Daryl was a sweet, simple man with a caring soul. I fondly remember the weekly dinners with Grandma Adam’s and Daryl and PA (Lawrence) & Tresia. I remember the holidays spent with Corey, Kathy and the dogs. May he rest in Peace. He was a loved man by all who knew him. Condolences to everyone affected by his passing. Xoxo

My heartfelt condolences go out to you, Lawrence and Tresia. May all the good memories sustain you at this difficult time.

My deepest condolences to all of the family. I have known Daryl for seventeen years and he was nothing but a gentleman. He loved talking of all his life experiences and he loved talking about his many trips to Algonquin park. He also really loved his dog. He was a gentle soul and he was loved by many at our senior building. May your memories get you thru these trying times.